As many of you know, from reading this blog, we do our best here at Warrior Life Services to remind our healing warriors to use the military skills they already possess to overcome the grips of “adrenaline poisoning.” Now, if you’re a first time reader here at The Warrior Nation: SITREP, we call post-traumatic stress disorder what it really is…poisoning from your own adrenaline due to your combat exposure.   This poisoning actually reshapes your brain and establishes new and very strong neural pathways in your central nervous system. The intrusive thoughts that accompany nightmares/daytime flashbacks come from these brain connections, along with your heightened state of arousal (hypervigilance). It is also what sets the stage for avoidance by “burning us out” and presenting a fearful unknown around every corner.

Having spent over 15 years in the pharmaceutical/biotech arena, I will be the first to say I do NOT think drugs are the only way to deal with this beast. We are big believers in using alternative methods to compliment what physicians prescribe. I would even suggest that many of our warriors are over-medicated and/or are taking prescriptions for medicines that have NO established evidence for how they are being prescribed. But to be fair to physicians, there’s the catch…do we medicate a warrior so they quickly become more docile and compliant or do we take a non-traditional approach that will take longer to see results…but do it with an angry, irritable, and volatile patient? Well danger is no stranger to this Airborne Ranger and that is why I choose to do what I do. So whenever I observe a behavior that pulls many of our warriors off track, I like to use this blog as a means of disseminating information to anyone that might be dealing directly with adrenaline poisoning or even their caregivers that face these challenges every day. That’s what prompted today’s post:

Falling out of the run

In my work with several groups of combat vets I’ve begun to notice something I wanted to share with my readers today. During the healing process, warriors encounter many emotions that tend to throw them off track. It’s important to note, that when groups get together, there is a natural bond that quickly begins to form. It is that familiar and comfortable air of camaraderie. When warriors begin working together in groups on their healing, the tempo and focus of their healing begins to intensify. It actually begins to “pick up speed.” Much like a car rolling down a hill, the movement becomes faster and requires caution. When warriors get distracted and lose focus, much like a car rolling down hill, any deviation from the path will cause a crash. So in warrior fashion, let’s break this situation down to first understand the “emotional distraction” and second, let’s draw on our military skills to deal with this.

If you’ve never served in the military, you may never fully embrace the power of group dynamics. Peer pressure is used to keep units cohesive and to push individuals past their ow 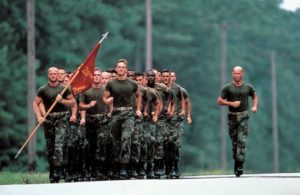 n self-defined limitations. One example is seen in physical training, where military units run in a formation. Ask any warrior the consequences of falling out of a run and he or she will tell you that your supervisors will berate you and your peers will ostracize you. I use this analogy, because this is the phenomenon I have witnessed in groups healing together. One member of the group will contribute less, or will be in a higher state of avoidance, or just may not WANT to heal.  They may even fabricate stories about their past service to look cool within the group. It is this behavior that draws the attention of the group members and before you know it, all have lost their focus on their healing and have become fixated on the “distraction” by the one. So what’s really going on here. Why has this person “fallen out of the run?” More importantly, why has the rest of the formation stopped?

First off, what we are seeing here is a true sign of “adrenaline poisoning” and that is avoidance. All warriors heal at different speeds and their reluctance to “keep up” can be a mix of several factors. They could be fearful of trying too hard, because they have previously begun a healing journey, but have eventually relapsed.

They could be reaching the edge of their comfort zone and have never been this far forward in their healing.

They may even have a caregiver that pays them more attention when they “want to quit” and they have become dependent on that attention they get when they exhibit this behavior. Psychologists refer to this as enabling and it is not encouraged for healing warriors.

Secondly, we are seeing a natural emotional reaction from the other warriors in formation…anger. The anger comes from many sources, but mostly it comes from “losing another combat buddy” to the beast. The other source of anger comes from thoughts of wishing the “quitter” was not in the healing arena and that they wish one of their former combat pals had the opportunity they are getting. Either way, the anger is truly the emotion that pulls the warriors off track and in many cases will derail their healing…or to use our car rolling down the hill vision…they crash.

Finally, let’s realize that in a warrior sense, healing in a group setting is not like running in formation. It’s more like moving in a wedge formation in an attack. (Warriors take a knee and I’ll get the civilians caught up quickly. ) 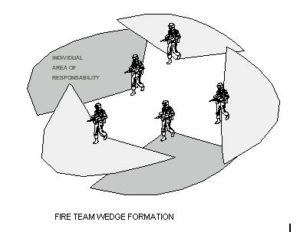 When military units move forward in an attack they move in a wedge formation, or an inverted V. Each member of the fire team (5 man unit) has a sector of fire that they are responsible for. It is important to focus on your assigned sector, as this prevents firing over, at , or behind your combat buddies. In a previous post, we dove into the need to stay on the Offensive as we heal from our combat experience, because we are developing new neural pathways in our brains, we are overcoming our fears through continuous expose to new and unknown places, and most importantly, we are accomplishing the things that are within our control to move us forward.

Healing from adrenaline poisoning is an individual offensive operation that requires continuous forward movement to your Objective. When working in a group setting, I offer this: Watch your lane! You are responsible for your assigned sector of fire. Don’t worry about the man on your left and right, they have their own sector of fire to deal with. It may seem selfish, but I would submit, this:  your focus serves as an example for others to emulate…and that leadership is something every warrior understands!